Which one should I take?

Time to start considering the college admissions process. A big part of that process is taking the SAT or ACT to apply to college. So the questions loom:

Understanding the answers to these questions is your first strategic decision in your college admissions process. Here are a few important points to consider:

Use these tips when beginning to formulate your testing plan. Creating a testing strategy helps to maximize your results and remove stress from the process. Woodlands Test Prep can help!  Call us at 713.205.1807 today for a free 30-minute consultation on your test prep strategy. 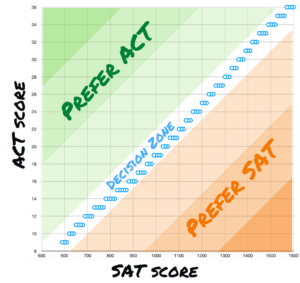 And click here for our in-depth discussion of PSAT scores and National Merit considerations.

The momentous changes to the ACT announced on October 8th, 2019 will change how students choose between tests, how they view retesting, and how colleges look at superscores.  We’ve spent the last couple of weeks, including last Thursday at a webinar hosted by ACT, Inc., learning much more about how the changes will actually work.

The three changes announced are:

While the individual section retesting has received most of the coverage in the press, the other announcements could be just as (if not more in some cases) impactful on how the college admissions’ testing process works for students.  Some of these effects have to do with the details of how all of this will work.  Let’s look at each component to see the details and possible effects.

Probably the most important unsaid fact about ACT, Inc. offering individual section retesting is that essentially no colleges have said how they plan to handle those scores.  During the webinar on Thursday, October 24th presented by ACT, Inc. covering all the changes, they announced that Vanderbilt has recently changed their policy to accept superscoring.  The implication is that the individual section retests will also be accepted as part of that.  While the logical assumption is that colleges that currently superscore will also accept the section retests, no colleges have definitively confirmed that they will.  Students in the class of 2021, who would benefit first from the ability to retest in the fall of their senior year, can’t rely on colleges accepting those scores.

Section retesting is only available for students who have already taken the full test.  Section retesting will only be offered online (much more on that later) and on the seven national test dates.  It is possible, particularly for the class of 2021, that capacity will not be conveniently available to meet the demand for section retesting.  If and when it is, students will be able to take up to three section retests on a single day, essentially making any combination of retesting possible (any combination of one to four sections).  In an interesting twist, ACT, Inc. personnel confirmed that students will likely be able to “retest” just the essay portion of the test, even if they didn’t take it the first time.  In our opinion, this option will eventually eliminate the need to take the essay unless or until students decide to apply to colleges which require or recommend it; there will be no need to take it “just in case” (assuming capacity is available).

To assuage the worries about students for whom retesting is a financial burden, ACT, Inc. is increasing the number of fee waivers from two to four and letting a fee waiver work for either a complete test or up to three retests. Regular pricing for section retests will be different (presumably less) than taking the whole test, but ACT, Inc. hedged on the actual pricing. (“Pricing is still being determined.”)

While most students (and their tutors) would agree that the order in which one takes sections matters, ACT, Inc. posits that order doesn’t matter.  “We have also conducted research to examine whether the order in which a student takes the ACT subject tests affects their performance.  We find that students perform similarly regardless of test order.  That is, regardless of whether you take the English test last or first, you are expected to earn the same score, which also supports the shift to single-subject retesting.”  This research has not been made available (unlike the research they have presented for the validity of superscores – see below).  Interestingly, ACT has not yet made a decision on whether students will have to take retests in the order in which they occur in a full test or in an order of their choosing.

It is our opinion that the opportunity to retest will be a significant factor in managing fatigue for some students. That being said, we will evaluate each student’s situation on a case by case basis. Often a student’s improvement on a superscore basis comes from sections that he or she did not expect, so focusing on only one section eliminates the possibility of improvement on those sections.  Section retesting will not be a universal panacea.

In September 2020, ACT, Inc. will begin to give students two choices in how they send their scores to colleges: either choosing test dates (including the choice of all test dates) or superscoring.  While some colleges have superscored the ACT for years, the number of school that do so lags behind schools that superscore the SAT.  Historically, ACT, Inc. opposed superscoring – rather vociferously.  In an about face, they conducted research over the last two years confirming (surprisingly) that superscoring is a better predictor of first year college grades than any other measure (average, last, or single highest test date).  In fact, they found that superscoring actually under-predicted first year grades. They hypothesize (and we concur) that students who are willing to retest are more likely to seek out additional help if needed at college.  One of the (not-so-subtle) subtexts of the webinar is ACT, Inc.’s hope that more and more colleges will now begin to superscore the ACT.  It is worth noting that the NCAA has always used a version of superscoring: the sum of the highest section scores achieved (rather than the average).  As the number of colleges superscoring the ACT increases, it will become more attractive as a testing option for students who score about the same on the SAT and ACT.

For the class of 2021 (and future classes), ACT, Inc. will super-score tests taken from September 2016 forward, including any section retests starting in September 2020.  Section retesting isn’t necessary to use the super-scoring option.

ACT, Inc. will start offering online testing at testing centers on national test dates in September 2020.  Online testers (and their score recipients) will receive their scores in two days instead of about twelve. Many of the changes to the ACT will be driven by the availability, however, of this online testing.  During the webinar, we asked in a couple of different ways how many centers and/or seats would be available for online testing.  When asked how many testing locations they anticipated being available, they said, “ACT is working on establishing the online testing centers. We are beginning with the current sites that offer ACT testing and will expand our search as necessary. When a student logs in to the registration system, it will display how close the nearest center is that offers online testing.”  We were underwhelmed with their certainty that online testing would be widely available.  In some states, online testing has been used for ACT/SAT testing for all juniors. Texas has not been one of those states, and will likely struggle to host enough testing centers with the infrastructure required (including but not limited to computers and high speed, reliable internet access).  Students will, of course, still be able to test with paper and pencil, but they won’t be able to do the individual section retesting.

Again, the issue of availability is crucial and means that the class of 2021 should not rely on its availability when making testing decisions.

From a test prep standpoint, the biggest change here is the move to online testing. While the rollout may not have a lot of capacity at first (that remains to be seen), the future is clear: online testing will continue to grow every year given the incentive structure put in place.  Unknowns abound in how the delivery of the online test will look and function.  ACT, Inc. stated in the webinar that online practice is available in ACT Academy, but the look and feel of it does not correspond to the functions described in the webinar (highlighting, etc.).  Navigation tutorials are expected to be made available but the timing for that is unclear.  We will remain on top of how these tests look and function so that as online testing becomes available for our students, we can guide them expertly in the same way we have always done with paper and pencil.